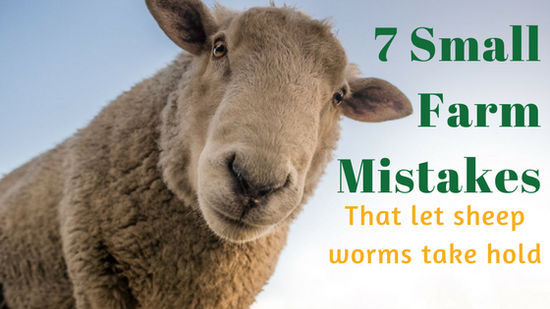 It's not dinner party conversation, but worms are a topic that every sheep farmer, including small farmers, need to address...

Most sheep have some worms in their digestive system, and as vaccinations are to humans, a little exposure is essential for sheep to develop and maintain an immunity to worms. But parasitic worms become a problem if they increase to the point where they weaken sheep and infest a flock.

If your sheep have access to adequate amounts of good feed but losing condition or suffering from scour (diarrhoea) it's likely they could be suffering from a worm infestation, one of the most common sheep health problems for lifestyle farmers.

Avoid making these 7 mistakes to stop sheep worms getting out of control on your property.

Worm eggs as they appear microscopically

At the risk of repeating ourselves (see our article http://www.farmco.com.au/blog/worm-egg-counts---why-should-i-bother-) , conducting regular worm egg counts is the best way to monitor whether your sheep are developing a parasitic worm problem. Worm egg counts help you see the signs of an emerging worm problem before your sheep become unwell.

If you don't conduct regular worm egg counts, you won't know you have a problem until your sheep become ill.  Worm egg counts should always be conducted before therapeutic drenching (that is, to treat an emerging worm problem). Strategic drenching, conducted at specific times of the year, doesn't necessarily require a worm egg count.

2. Getting your drenching wrong

Under-dosing your sheep with drench can be easy to do, and will expose your sheep to potential infection.  Correctly calibrated drenching guns can help deliver the right dose, but you must work it out based on the weight of your sheep and lambs.  Watch out for air being sucked into the drenching gun when it is loaded, as this can also cause the wrong dose to be given.

Different drenches also have different doses, so it's important to check the label each time. Under-dosing is one of the major causes of drench resistance in sheep it's similar to the problems that can occur when people don't take the full course of antibiotics they have been prescribed.

Drenching too often or not following a set program, is also a problem. As a general guideline, non-breeding sheep should need a single drench a year, and lambing ewes and weaners two drenches. Please keep in mind that conditions on your property and in your region will ultimately affect how many drenches you need.

WormBoss has created a handy Drench Decision Guide for different Australian regions to assist you in learning about this http://www.wormboss.com.au/tests-tools/drench-decision-guide.php

If you are drenching regularly and still have a problem with worms, don't increase the drenching. Your sheep may already have a case of drench resistance and you will need to consult your vet for advice.

You should conduct a follow up worm egg count between 10 and 14 days after your sheep are drenched to see if the treatment has been effective. If the worm egg count is higher than 200 epg you may need to use a different drench for effectiveness consult your vet for advice.

4. Missing the signs of infection

Signs of infection caused by worm infestation in sheep include scour (although this can be caused by other factors), lack of stamina and weight loss. Some parasites, such as barber's pole worm and liver fluke, lead to blood loss and anaemia, which is reflected in pale gums and eye rims.  Bottle jaw is a swelling under the jaw that can also result from these two parasites. Lambs and sheep under stress, such as those in late pregnancy or lactating, are the most susceptible to infection, so it's important to keep an eye on these sheep in particular.

5. Being a creature of habit

We all like certain brands, but it's important to alternate the type of drench you use to effectively treat sheep worms. There are 3 types of drench (white, clear and mectin) that all work differently. When worms adapt to a particular type of drench it can become less effective, so regularly using a different type will help reduce long term worm survival and fight against drench resistance. It is estimated that about 90% of Australian flocks have resistance to white drenches,, about 80% to clear drenches and around 60% to combination drenches (http://dpipwe.tas.gov.au/).

Introducing new sheep to your existing flock can be a time of danger. If you purchase or agist sheep or borrow a ram to mate with your ewes, they may bring worm problems from their previous property. New arrivals should be given a "quarantine drench" and kept from pasture for 6 to 8 hours until it has had a chance to act.  This reduces the possibility of them contaminating your pasture (see below) and other sheep.

Worm eggs from infected sheep are passed out in their dung onto where they are pastured. The eggs then hatch out into larvae which may survive up to several months, depending on the conditions. When sheep graze on this contaminated pasture, they ingest the larvae and can cause heavy worm infestations.

The most dangerous time for sheep to pick up contamination is usually late winter and late summer, when pasture can be lower and sheep are grazing closer to the ground. Poor pasture can also result in other problems such as selenium deficiency (http://www.farmco.com.au/blog/selenium-deficiency-in-sheep-and-cattle) which can impact your sheep's health. When a pasture is in a period of poor growth, sheep nutrition can be maintained by giving them top up feed of grains such as oats, barley and lupins, as well as sheep pellets.

These must be introduced gradually into feed, or there can be serious problems.
After drenching, putting sheep back onto contaminated pasture will just keep the cycle of infection going, so it's important to rotate them onto new pasture after drenching.

It is important to have a worm management plan even if you only have a few sheep, to stop worm disease taking hold. Avoid these 7 mistakes to stay on top of potential worm infestations in your sheep.

Author:Amanda Walker
About: Amanda Walker is the Director of The Farm Co and Yerecoin Traders. Amanda has extensive experience in animal health, working for a number of years with the Institute for Animal Health in the UK. Amanda also worked for a UK government response team during the Foot and Mouth outbreak back in in 2001. Amanda has a keen interest in sheep and livestock health, working with her local grower to help manage their parasite control throughout the seasons.
Connect via:Twitter
Subscribe via RSS
Tweet