Selenium Deficiency in Sheep and Cattle

Posted by Amanda Walker on 4 February 2019 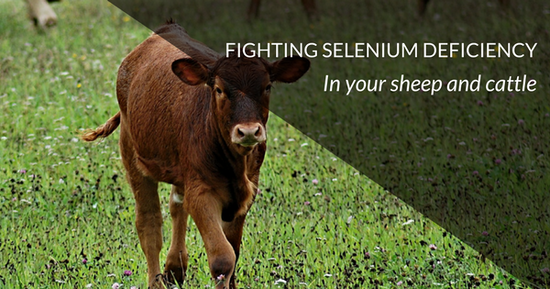 Selenium Deficiency in Sheep and Cattle

Selenium is a trace mineral found naturally in the soil. It appears in certain foods and there are even small amounts in water. For humans, selenium is a vital mineral to increase immunity, protect cells from free radical damage and inflammation, and support a healthy metabolism and fertility. It is also essential for your farm stock, particularly sheep and cattle.

In ruminants including sheep and cattle and even horses, selenium works together with vitamin E to:

As well as supporting these normal functions for health and growth, an adequate amount of selenium in their diet helps prevent diseases and disorders such as white muscle disease, mastitis and calf scours.

Where does selenium come from?

While humans get our selenium from natural food sources including Brazil nuts, eggs, liver, tuna, cod, and sunflower seeds, poultry and certain types of meat; sheep and cattle receive their dose from the plants they graze on.
Selenium is found in the soil and taken up by plants at different levels. The uptake depends on factors such as plant variety, rainfall levels and fertiliser application. When ruminants consume selenium from plants it is stored for a short period in the body, mainly in the liver, before being flushed out in normal waste. A continual dietary supply ensures the best possible production.

What happens if sheep and cattle don't get enough?

Selenium deficiency has serious repercussions for your grazing animals.  In sheep, it can cause white muscle disease in lambs and weaners scouring, ill thrift, lowered wool production and reduced fertility in ewes.
In cattle, calves can also suffer from white muscle disease, while older cattle can suffer from conditions including cystic ovaries, early and late embryo death, mastitis and retained placenta. According to the United States Department of Agriculture, selenium deficiency in sheep and cattle costs livestock producers an estimated $545 million annually in losses in affected areas of the US.

This disease is also known as 'subacute enzootic muscular dystrophy' or 'stifflamb disease'.  It is a degenerative muscle disease commonly observed in newborn lambs who have difficulty standing up and moving to their source of food. Affected lambs display signs of pain if they can and usually have an arched back and uncomfortable appearance. Eventually they will become too weak to nurse.

Affected cattle may also exhibit signs ranging from stiffness, to walking with an arched back and spending more time lying down. The disease can show symptoms after birth, triggered by vigorous exercise. If a calf is affected it may die of starvation due to an inability to nurse properly due to weakness. The disease gets its name from the white, chalky striations seen in the muscles post-mortem, due to abnormal calcium deposits.

Weaner ill thrift is characterised by loss of weight at weaning and failure to gain weight subsequently, as well as decreased wool production.

Selenium deficiency results in the death of the embryo in pregnant ewes at around 35 days after conception. This shows up as an increase in the number of dry or barren ewes in the flock.

Selenium deficiency may see increase occurrence of retained placentas and ovarian cysts during the postpartum period in cows.

What causes selenium deficiency in animals?

Certain geographic areas of Australia are predisposed to selenium deficiency due to environmental factors affect their region. Selenium deficiency occurs in large parts of south-west Western Australia and coastal Queensland, as well as parts of New South Wales Victoria, South Australia, and Tasmania. 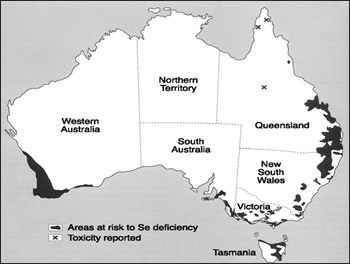 Some factors that can affect selenium levels in the environment include:

Sheep will also have greater trace mineral requirements at certain times of the year, particularly before joining, when lambing and weaning.

Before treating your flock for selenium deficiency, it's important to be sure of the diagnosis. Other trace elements and nutritional deficiencies can also cause poor growth rates and infertility so self-diagnosing selenium deficiency is not advised. An excess of selenium can be toxic. Accurate diagnosis may require blood samples from at least 10 animals, so it's best to seek your vet's advice before starting a treatment plan.

There are a range of treatments available for selenium deficiency, including in-feed or water-based medication, drenching and injection.

At Farm Co, we stock a range of products to treat selenium and other nutritional deficiencies.  Always seek veterinary advice before ordering these products for convenient delivery:

Author:Amanda Walker
About: Amanda Walker is the Director of The Farm Co and Yerecoin Traders. Amanda has extensive experience in animal health, working for a number of years with the Institute for Animal Health in the UK. Amanda also worked for a UK government response team during the Foot and Mouth outbreak back in in 2001. Amanda has a keen interest in sheep and livestock health, working with her local grower to help manage their parasite control throughout the seasons.
Connect via:Twitter
Subscribe via RSS
Tweet